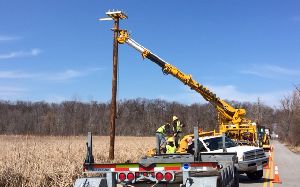 04/03/14 The Indiana Department of Natural Resources and NIPSCO are working together to make northwest Indiana a better place to raise a family, especially for osprey. 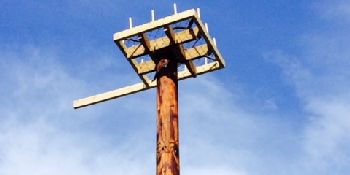 The osprey is a state-endangered bird of prey with a nesting population of fewer than 60 pairs in Indiana.

The last osprey nest in northwest Indiana occurred more than 100 years ago. 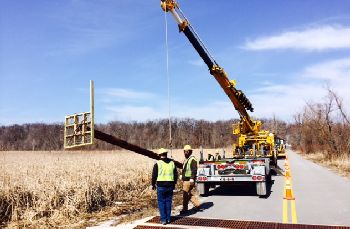 In much of the eastern United States, ospreys favor artificial structures for nesting. Annual bird counts have shown that more than 100 osprey migrate over the dunes each spring.

“The osprey is a fascinating bird to watch” said Brad Bumgardner, interpretive naturalist at the park. “Their comeback is a symbol of the importance of wetlands, clean water and a healthy environment. They’re a great bird to get visitors excited about wildlife and to learn more about the outdoors.”

Funding to build the platforms, which sit atop the 30-foot utility poles, came from the Friends of Indiana Dunes group.