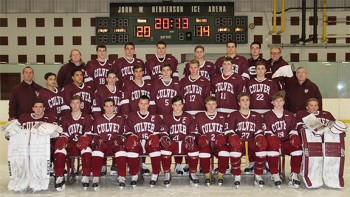 GREEN BAY, WI – The Culver Military Academy Prep Hockey team will begin play in the Toyota-USA Hockey Tier I Youth National Championships in Green Bay, Wis., Wednesday, April 2. The Eagles, who are making their first trip to nationals, will be playing in the 18-and-Under division after winning the Mid-American district championship March 15-16.

Sixteen U-18 teams from across the country will play in four four-team pools beginning Wednesday. CMA’s first game will be against the Cleveland Barons at 8 p.m. (CDT), Wednesday. That will be followed by a 4 p.m. game against the Colorado Rampage on Thursday, April 3, and a Friday, April 4 game against Little Caesars at noon.  Teams must finish first or second in their respective pools to advance to Saturday’s playoffs. The games will be streamed on FastHockey.com.

CMA averaged 4.2 goals per game during the Mid-Am tournament. The Eagles defeated the Ohio Blue Jackets, 4-1, in the championship game. The semi-final 3-2 victory over the Pittsburgh Pens Elite went to a seven-player shoot-out. The team also had victories over the Indiana Junior Ice (4-0) and Gilmour Academy (6-1). The Mid-Am championship was played in Columbus, Ohio.