No leads in downtown Plymouth vandalism 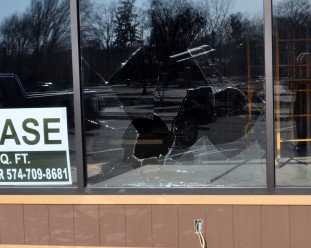 Vandals threw a brick through a window on Water Street

PLYMOUTH – Vandals struck over the weekend at a newly remodeled property on Water Street in downtown Plymouth.

The building that formally housed the Salvation Army Store has undergone a facelift by the new owners of the property Jim Vinall and Brian VanDuyne. Monday morning Plymouth Police were called to the scene with a report of a brick having been thrown through the front window of the property.

The building is directly across the street from the city’s new River Park Square and the vandals had used a paving brick from a skid of bricks nearby being used for the project to do the damage to the front window.

So far Plymouth Police have not reported that they have any leads in who may have committed the crime.