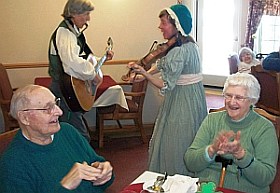 Residents of Miller’s Assisted Living celebrated St. Patrick’s Day in grand style as the dietary department served a traditional Irish meal.  The menu consisted of corned beef and cabbage with red potatoes and carrots, Irish soda bread and green beer.   Residents and guest that wore green were given a special prize.

Mark and Liza Woolever preformed Irish music during the meal.  The Woolever’s played over ten different acoustic instruments during their program.  They involved the audience as they passed out rhythm instruments for them to play throughout the program.  They also occasionally strolled through the dining room as they played popular tunes such as “When Irish Eyes Are Smiling”, “Danny Boy”, and “The Band Played On”.