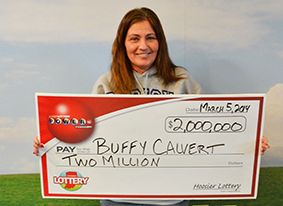 INDIANAPOLIS – For Buffy Calvert of Kempton, March 5  started out like any other day – but turned into one she will never forget. When Calvert woke up Wednesday morning and started running errands she never expected to find herself holding an oversized check for $2 million at Hoosier Lottery headquarters in Indianapolis.

The Tipton County woman’s normal day took a turn when she stopped for a soda after hitting the grocery and having lunch with her daughter and son-in-law in Kokomo. While in the store, Calvert decided to check her Powerball ticket from Saturday night. She was pleasantly surprised to find out the ticket was worth more than the store could pay out. She was advised to claim her prize at Hoosier Lottery headquarters, so she headed to Indianapolis to claim her winnings, all the while assuming she was looking at a few hundred or maybe a few thousand dollars in prize money.

Calvert made it to the lottery office just before closing and handed her winning ticket over to Hoosier Lottery officials. It wasn’t until the claims specialist congratulated Calvert on her $2 million win that she found out how much she had really won!

“I didn’t know how much I won until I walked in here (Hoosier Lottery headquarters)!” said Calvert.

“Disbelief” was the only way the lucky winner could describe her winning moment, which was so unexpected and so overwhelming it brought both Calvert and the claims specialist immediately to tears.

As her good luck and fortune began to sink in, Calvert was quickly able to put her big win in perspective.

“I’m in disbelief. This is an unforgettable moment and an unforgettable day,” said Calvert. “But it started out as the most normal day.  I mean, I went to the grocery and took my daughter and son-in-law out to lunch. Normal stuff.”

The mother of two grown children and seven grandchildren says she plans to invest a good chunck of her winnings.  She is also looking forward to making a donation to a charitable cause.

Calvert purchased her lucky ticket at Speedway at 405 E. Jefferson Street in Tipton. Her ticket was one of seven nationwide that matched the first five numbers, but not the Powerball, in Saturday night’s $60 million Powerball drawing. Of those seven, Calvert and three others increased the $1 million prize to $2 million by adding Power Play® to their tickets for an extra dollar.

The Hoosier Lottery reminds all players to play responsibly. Must be 18 or older to play. Gambling Addiction Referral Line: 800-994-8448.