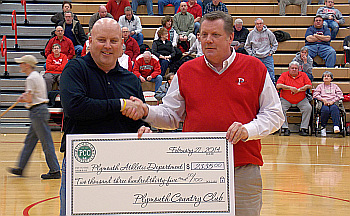 02/28/14 Thursday evening during the Plymouth High School boys basketball games Pat Bayley from the Plymouth Country Club made a presentation to the athletic department.

This year the Plymouth Country Club, under the leadership of Brad Parkhurst and Pat Bayley were able to get their members to pledge $5 for every point scored by the Pilgrims in select basketball games.  A check in the amount of $2,335 was presented by Bayley to PHS Athletic Director Roy Benge. 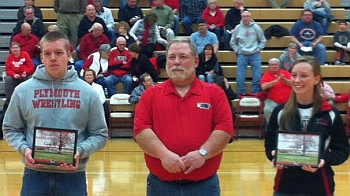 The March Scholar Athletes of the month were also honored last night.

Female scholar athlete for the month of March is Makayla Fox, the daughter of Daniel and Julie Fox.  Makayla is 52nd in her class.  She is on the golf team and gymnastics teams.  Makayla is in multiple clubs and plans to study engineering at Purdue University.

The male scholar athlete for the month of March is Corey Wallace, son of Kathy Wallace and Larry Wallace.  Corey is 47th in his class and is a member of the wrestling and football teams.  Corey’s future plans are to attend Purdue University and study engineering. 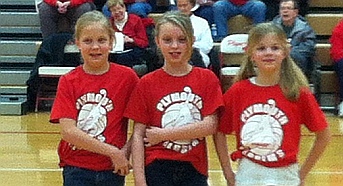 Also being recognized Thursday evening during the games was the Lemonade Stand Girls.  The Plymouth Boys Basketball team had a fundraising golf tournament hosted by the Plymouth Country Club during the fall of 2013.