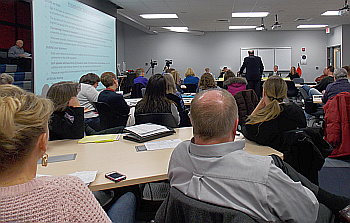 02/27/14 Residents from all over Indiana were given an opportunity to voice their opinions or concerns over the State’s move to adopt their own standards for Indiana’s schools. Three sites in the state were chosen to receive public input, including Plymouth, Sellersburg, and Indianapolis. A four-hour hearing when people from all over the state were allowed to speak was held in the Weidner School of Inquiry on Wednesday. Additionally, stakeholders could post comments on the Indiana Department of Education website.

The purpose of the hearing was for the State Board of Education to hear public testimony on the draft of English/ Language Arts and Math standards that were posted on the Indiana Department of Education website on Feb. 19.

Teams of educators from all over the state collaborated to draft a set of standards in the areas of math and English that could replace those adopted through Common Core by Indiana and 44 other states. 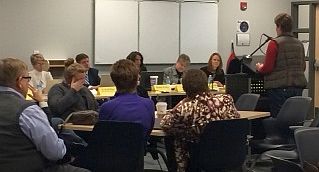 The Common Core initiative details what students in grades K-12 should know in English/ Language Arts and mathematics by the end of each school year to develop consistent education standards across the states and help ensure that students graduate from high school prepared to enter college programs or the workforce.

Indiana adopted the Common Core standards in 2010, but later put the adoption on hold after criticism of them emerged. Senate Bill 91 concerning the Indiana adoption was authored by Indiana State Senator Scott Scheiders R-Indianapolis.

The draft penned by the committee will likely be the framework for what will replace Common Core standards in the state, if the State Board of Education approves by vote in April.

The draft is some 98 pages long and contains approximately 1,000 benchmarks to indicate mastery by students.

Indiana standards are expected to be confirmed by July 1 first to give teachers time to plan lessons for the beginning of the 2014-2015 school year. 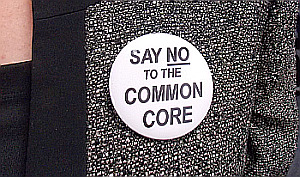 Among those speaking at the Plymouth site was Plymouth Community School Corporation Assistant Superintendent, Dan Funston. Funston began his comments saying, “The standards contain content area material that is rigorous in nature and for this, I am grateful.” He added, “For example, there are several references to citing evidence from the text to support an argument and students are continually asked to develop clear narratives and to draw from the text.” He also spoke to standards included in the draft specifically for 6th grade language arts. “I would like to make a general comment followed up with specific examples. In Math and Language Arts areas, I believe that there are too many standards to teach, learn, and monitor,” said Funston. He went on to point out particular parts of his draft that he feels are redundant.  “This breadth of standards will also prevent us from personalizing learning for our students. The breadth of these standards will lead to more assessment and continue to make our children dislike school,” he said.

Funston ended his comments saying, “These obvious redundancies make me wonder how much vetting the draft standards have been through before now…it also makes me wonder if we will have an appropriate amount of time to make sure we do this right before implementing them in our classrooms.”

Identifying himself as a concerned father and grandfather, Brian Kindness said, “Are we really teaching kids to be prepeared for college or career readiness?” He continued, “Why have you put this on the fast track. There just hasn’t been enough time for people to study it.”

Christopher Judie told the Board that they took their 10-year-old out of public school this year because they felt she was not being challenged enough. He also commented that when he looked at the standards, he felt it was mainly a “cut and paste” job from Common Core.

Parent Paula Thomas asked, “What does it take to make students successful. Standards or the people who teach them?” She added, “Many of the standards were inappropriate and you are setting kids up to fail with some of them.”

Janet Flores, assistant superintendent of Lakeridge School in Gary, supported Common Core standards saying, “We have been using Common Core for three years. Our scores have gone up across the board. It worked for us and we are living proof.”

Sam Wysong who teaches 7th grade math in Warsaw noted that 41 of the 52 standards are identical to Common Core. He was supportive of most of the standards, but said, “What do all students need to learn to be better citizens in the communities, the Hoosier state, the nation and the world?”

Several of those speaking indicated that the draft standards contained what they referred to as “cut and paste” portions from the Common Core standards; while other shared their beliefs that the makeup of the panel and had a bias toward Common Core.

The State Board of Education’s goal is to approve final standards in their April 9 meeting.