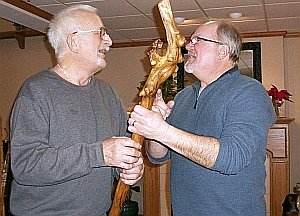 02/27/14 Plymouth resident and woodcarver extraordinaire Bob Snare took time from his busy work schedule Tuesday afternoon to share his talent with residents of Miller’s Assisted Living.  Snare brought some of his most prized creations to show as well as the tools he uses to create his artwork.

Snare prides himself as being a charter member of the Good Time Woodcarvers Club which meets each Monday at the Life Enrichment Center from 9:00 a.m. – 12:00 p.m.   Members of the club have worked on several projects throughout the past years which include a saloon, a round barn and a pirate ship.  Each of these projects has carved people, furniture, and knick-knacks down to the minutest of details.  These creations have been or are on display at the Life Enrichment Center, The Marshall County Museum and the Plymouth Public Library.

Snare has been carving since the 1980’s.  Before that he was particularly interested in drawing and sculpture.  He is known for the detailed work he does carving faces and he particularly enjoys carving “tree spirit faces” in branches and limbs that he makes into wall hangings or walking sticks.  Snare does not draw the faces first.  He looks at the wood, starts carving and he waits to see what appears in the wood.  When his creation is finished he uses a spray lacquer to preserve the finished piece.

Residents enjoyed handing Snares carved pieces and looking at the intricate detail.  They asked many questions about the types of wood he likes to use as well as the tools and where he purchases his supplies.  Resident Larry Krieghbaum brought a few of his own carved items out for Snare to look at.

Snare ended his program by inviting the residents to attend the annual Good Time Woodcarvers Show which will be held on Saturday, April 26 from 9:00 a.m. – 3:00 p.m. at the Life Enrichment Center located at 1305 Harrison Street in Plymouth.  There will be items for sale, raffles, demonstrations and a carving competition at the show.