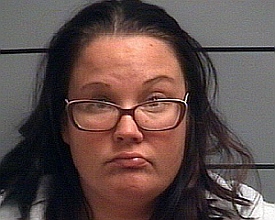 02/27/14  On Tuesday, February 25, at approximately 11:37 P.M. an officer with the Marshall County Sheriff’s Department initiated a traffic stop on a vehicle on U.S. 31 at the intersection with 3A Road.  The traffic stop was for several moving violations.  During the investigation, County Police Canine, Arras was walked around the vehicle and indicated the presence of narcotics.  A search of the vehicle located approximately 200 grams of what was believed to be marijuana.  The substance was packaged in a manner used in dealing marijuana.  The female driver, 31 year old Christina M. Wengerter of Indianapolis was taken into custody.

Wengerter was transported to the Marshall County Jail where she was booked for Possession of Marijuana of more than 30 Grams and Dealing Marijuana.  Her bond was set at $3,005 cash she was given a Court Date of March 25 in Superior Court II.