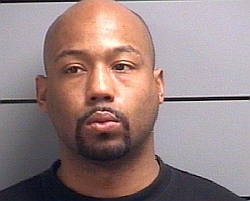 02/12/14  On Sunday, February 9th Marshall County Sheriff’s Deputy Jonathan Bryant attempted to stop on a snowmobile near the intersection of US 31 and 11th Road. The driver identified as 30 year old Brandon P. King of Plymouth failed to stop initiating a pursuit where Mr. King traveled recklessly south on US 31 before traveling west on 14th Road.

After a short time Mr. King traveled off the roadway in attempt to lose officers but was unable to clear a large snow bank at the ditch line causing the snowmobile to become stuck.  Mr. King led officers on a brief foot pursuit.

Brandon King was found to have an active felony warrant for Battery, Residential Entry and Auto Theft and now faces new charges of Resisting Law Enforcement, Driving While Suspended with a Prior charge of the same offense and Reckless Driving. He was transported and lodged at the Marshall County Jail and booked on a $3,005 bond.