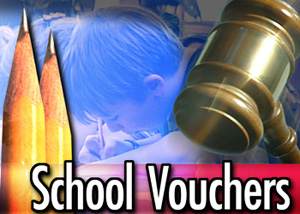 09/26/13 The number of voucher applications that allow Indiana students to enroll in non-public schools has risen dramatically. The Indiana Department of Education (IDOE) released information this week that as of the September 1 deadline, 20,047 applications were submitted for the 2013-2014 school year. The Choice Scholarship Program, commonly known as vouchers, now reflects the largest applicant pool in Indiana history.

Betsy Wiley, president of School Choice Indiana, said, “We applaud Governor Pence for signing the School Voucher Improvement Bill (HB 1003) into law earlier  this year and giving more parents this impartment option.” In essence HB1003, expanded eligibility to more low and middle income families that live in areas serviced by D or F rated schools by the State Board of Education. HB 1003 took effect on July 1, 2013.

Participating non-public schools, including religion based schools, must be accredited by the state or another regional accreditation agency recognized by the state board. If a school received more applications than they can meet, they must conduct a lottery.

The vouchers that are extended to parents or guardians help pay for tuition at a private school and are calculated on the family’s income. Students who qualify for the free-and-reduced lunch program are eligible for a voucher up to 90 percent of the state tuition amount for the school district where they reside.

It is estimated that 600,000, or some 60 percent, of Indiana’s students in grades K-12, are eligible to receive vouchers.

Wiley added, “The growth of this program is good news for Indiana families and students.” “While most kids are served well by their public school, we can’t deny that some families need different options. This program gives more parents the tools they need to make the best educational choices for these children.”

Opponents of the voucher program contend that the increase in voucher enrollment means fewer dollars for public schools and, in turn, has a direct impact on the public school offerings.

Plymouth Community Schools Superintendent Daniel Tyree said, “It’s the law and we have to abide by it.” Tyree said that the Plymouth Schools have continued to gain more students each year, even after the voucher program was instituted. He said, “It (vouchers) have not hurt PCSC and I don’t believe they have hurt public schools in Marshall County.” He added, “I do think it’s unfair to put a mixture of religious based schools with public schools” “However, if you offer a good product, people won’t ask for vouchers.”