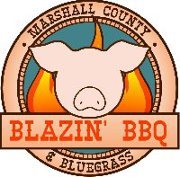 09/19/13  Summer is winding down but there is still plenty of summer left, so stop looking and head to the First Annual Blazin’ BBQ and Bluegrass Cook Off Contest presented  by the Marshall County Visitors and Tourism Office!

On Friday, September 21st from 10 a.m. until 6 p.m., teams from across the country will begin to compete in a two day professional cooking competition sanctioned by the Kansas City Barbeque Society.

Held in beautiful Centennial Park in Plymouth, the Blazin’ BBQ and Bluegrass contest showcases the best BBQ grill-masters from across the country competing for the World Championship in four categories; chicken, ribs, pork and brisket.  Free to the public, citizens are urged to indulge in a two day competition of BBQ, with food vendors and live entertainment.    Echo Valley will perform on Friday at 7:00 p.m. and again on Saturday at 1:00 p.m. and 5:00 p.m.  Autumn Leed and The Dirty Earth Band will be performing Friday at 5:30 p.m.

So grab the family and see “BBQ Pitmasters” first hand at the Marshall County Blazin’ BBQ and Bluegrass Cook Off Competition held this Friday, September 20th from 5-9 p.m. and Saturday, September 21st from 10 a.m.- 6p.m!