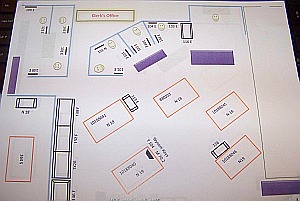 09/18/13 Federal regulations have caused the Marshall County Clerk to make a major change in her office.  In a 2012 audit it was noted that the Child Support area was not secure enough for the new standards.  It was noted that too much paperwork could be seen by the public as they stood at the front desk.

Clerk Julie Fox made the decision to relocate the two child support clerks to the traffic area and move the three traffic clerks to the former child support area.  Fox said due to the federal regulations she is able to use 4D funds and ARRA funds instead of General Fund money to make the necessary changes. 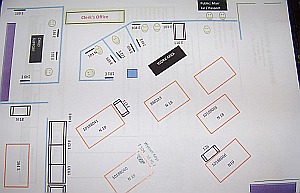 Although the two areas have been swapped, the clerk said there is necessary remodeling work to be completed to make the office more efficient and safe.  She presented a drawing of the proposal with two quotes for the work that includes relocating the counter top and cabinet creating a larger public access area and lowering the counter tops to allow for those seeking marriage certificates and passports to sit while filling out paperwork.  Work will also include working repairs to the wall and wallpaper, and flooring

The two quotes for the work were $4,380 from Bruce Geldner and $4,945 from Schoberg and Schoberg.  The clerk noted that Schoberg had done the previous work and still has materials to match the existing wall covering.  Commissioner Deb Griewank motioned to allow the project and for Schoberg to complete the project.  The motion passed unanimously.

The project now moves on to the County Council for final approval.