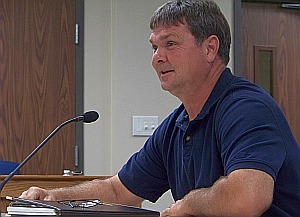 09/18/13 Local farmer, Robin Roberts appeared before the Marshall County Commissioners Monday with his concerns on the Reynolds to Topeka NIPSCO power line project.  He said he has contacted the Lt. Governor, US Senator Donnelly’s Office, Congressman Jackie Walorski, and State Representative Tim Harman to get the legislative involved.

Roberts, a delegate to the Indiana Farm Bureau doesn’t want to see  more farm ground negatively affected or trees needlessly chopped when NIPSCO installs the new towers and lines across farm fields the through woodlands.

Addressing the commissioner Roberts noted the recent decision to not allow commercial wind turbines in Marshall County. He suggested the commissioners consider a similar decision be sent to NIPSCO against new transmission lines.  Robin said the current towers have a line already from Reynolds to Topeka that could be used…noting the current high intensity towers are only being used at 25%. 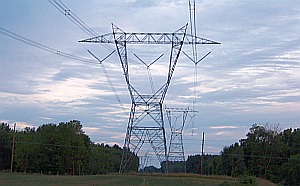 Roberts is not against NIPSCO improving power transmission but believes the current lines could handle the new project without the negative impact to the approximate 50 property owners in Marshall County who will be affected by the new route.

The concerned farmer told the commissioners there are about 110 new irrigation systems that NIPSCO would have to work around since towers in a field and irrigation don’t work well together.

Roberts was also concerned that the project wasn’t actually a NIPSCO project but a recommendation from MISO.   (Midwest Independent System Operator-MISO is an essential link in the safe, cost-effective delivery of electric power across much of North America. They are committed to reliability, the nondiscriminatory operation of the bulk power transmission system, and to collaborating on creating cost-effective and innovative solutions for the changing industry.)

Although the route of the new line has been determined the design phase is currently underway.  Roberts said, “I believe there is a small window of opportunity open to change the design of this project.”

Although the commissioners made not official commitment of support on Roberts suggestion to use current transmission towers and his continued research on the project, they expressed interest in information sharing sessions with our legislators.