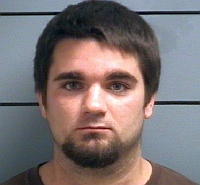 On August 12th Detective Culp was notified by Bremen Police that child molesting complaint was on their station.  Officer Culp responded and spoke with the concerned citizen and an investigation began.  It is alleged that the incident happened on August 4th while 23 year old Jesse Slabaugh was swimming with a 13 year old female.

On August 14th Slabaugh was interviewed by the Bremen Police Department and after waiving his rights admitted he inappropriately touched the 13 year old.  He also admitted to touching her for the past five years and also when the female was about 3.

Slabaugh was arrested at 4:40 p.m. Friday, September 13th for child molesting fondling or touching a child under the age of 14 as a class C felony, and Sexual Battery with treat of force to submit as a class D felony.  His cash bond was set at $10,000 cash and paid at 6:10 p.m.  Jesse Slabaugh was released and given a September 17th initial court date in Marshall Superior Court I.

Listeners are reminded that charging information supported by an affidavit of probable cause is a mere allegation that a crime has been committed and that there is only probable cause to believe Jesse Sabaugh committed it.  Mr. Slabaugh is presumed innocent throughout that proceedings and he is entitled to be represented by counsel and is entitled to a trial by jury at which the State is obligated to provide proof beyond a reasonable doubt before a judgement of guilty may be made.