Drainage Board hears Issue at US 31 & Kenilworth 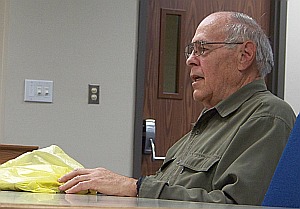 09/17/13 The Marshall County Drainage Board heard the request for assistance from Jerry Carpenter of Argos during their meeting Monday morning.  Carpenter appeared before the commissioners two weeks ago asking for a determination of who is responsible for cleaning the ditch at US 31 and Kenilworth.

During Monday’s meeting Carpenter said, “You have allowed me 10 minutes to discuss my issue.  I think I would need 10 hours or even 10 days to explain the problems.”  He did say that most of the problem is with drainage although he wants to know who is responsible since he has been doing the cleaning for the past 37 years.  He said the issue continues with rocks and weeds and brush and trees but said that would be his problem. 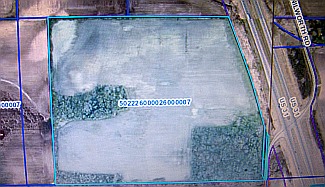 When US 31 went through Marshall County many years ago the state did a commendation of property o his father’s farm for the project.  Once the project was complete the state placed fences at the edge of the property.  Now many years later the state seems to want to push the drainage cleaning on the county or private individual.  In 2000 Fred Krismatic from INDOT met with Carpenter at the site and indicated that the state only had responsibility just so many feet off the roadway.  He did arrange to have the ditch cleaned and said that would be the last time.  Carpenter noted that the state has cleaned the ditch three times in 37 years.

Drainage Board President, Jack Roose said he has done some research on the issue.  He has been to the site, looked at the county maps and abstracts and plats from when the state purchased the property and attempted to talk with Randy Brown at INDOT.   Roose said, “The county maps show that it belongs to the state.”

Mr. Carpenter said he would like to find out whose property it is because he is not able to do the work anymore.

In other business the County Drainage Board appointed Randy Glingle to the Kankakee River Basin Committee as the county’s representative.  The committee meets every other month.