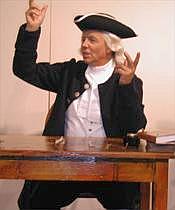 09/16/13 B.J. Johnston of Jackson, Mississippi has appeared in more than 50 theatre productions throughout America and is now performing “The Man From Altersgate”, a one man play compiled from the actual journals of John Wesley by playwright Brad L. Smith.  Johnston will be bringing his talent to Marshall County this week.

The actor has spent most of his life working as a missionary using theater and music to spread the gospel, just as Wesley did.  Johnston recently retired from the faculty at Belhaven College to begin sharing the life of Wesley with others.

“I’m really getting back to my love of teaching through the arts,” Johnston said.

Johnston spends about two hours transforming himself into Wesley, considered the founder of Methodism. The play, written by Brad Smith, takes about two hours in its full form. However, Johnston adapts the presentation to fit the time period allotted.  Johnston believes the play shares a story of faith. 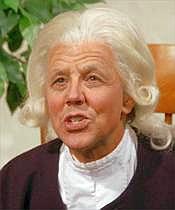 “This is a play about transformation,” he said. “We see Wesley transformed from a man who would earn his salvation to giving up and realizing he can’t earn his salvation.  What a difference there is between someone talking about Wesley and seeing someone acting it out,” Johnston said. “It engages a person’s imagination.”

If Johnston’s name sounds familiar to some it may be because he was in the area this summer appearing at Shiloh Wesleyan Church.  Cindy Flagg, a member of the Plymouth First United Methodist Church saw the play and was so touched by it she thought others should have a chance to experience it.   Flagg approached the chairperson of the Outreach and Membership Committee and the committee decided to bring Johnston back to the area.

Johnston as Wesley will share on the following topics:  how Wesley’s mother’s faith shaped his personal destiny, how to share your faith with others in a personal manner, nothing is more important than prayer, religion is the most dangerous idol of all and God has only children – not grandchildren.

Photo Caption:  B. J.  Johnston appears as John Wesley – The Man From Altersgate.