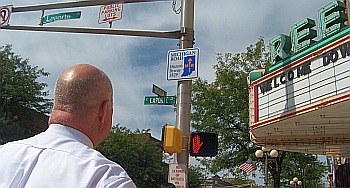 09/13/13 Last week representatives from the Historic Michigan Road Byway Association showed off the new signs recently installed in Plymouth.  The signs recognize the most importance of the transportation route in the State of Indiana. Being the first road commissioned by the Indiana State Legislature in 1826 Michigan Road became a key thoroughfare in opening the state to settlement.

Kurt Garner and Byway association member Mark Gidley gathered with Mayor Mark Senter, Linda Rippy from the Marshall County Museum, Mike Woolfington representing the Convention and Visitor’s Bureau, Jack Davis from PIDCO and Chris Kurtis from Christo’s Restaurant and Banquet Center at the corner of Michigan and LaPorte Street in front of the Rees to show off one of the new signs. 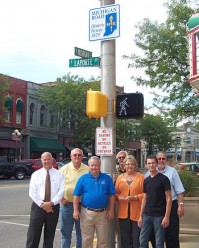 In Marshall County there are 17 signs along Michigan Road. Sponsors for the signs included the Convention and Visitors Bureau, the Marshall County Museum, Wythougan Valley Preservation Council, and Christo’s Restaurant.   Also helping in the Historic Michigan Road Byway was PIDCO who provided seed money for the formation of the organization.