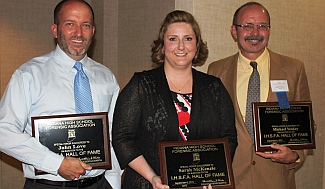 09/13/13 Plymouth Schools Speech Team Coach, Sarah McKenzie, was inducted into the IHSFA (Indiana High School Forensic Association) on September 6. Those inducted into the Hall of Fame are nominated by a fellow IHSFA member and voted on by an executive committee.

She has served as the Head Speech Coach at Lincoln Junior High School for the past nine years. However, her dedication to both students and speech programs dates back to 1994.

She began her career as an assistant speech coach at Northfield High School in Wabash, a position she held until 2000. For one year, she moved to Lewis Cass School as an English teacher and extra-curricular speech coach. Not only did she coach after school hours at Lewis Cass for the year, but remained dedicated to students at Northfield. Although time consuming, she made the 45 minute trip to Northfield each evening to meet with competitors. For three years, she taught at Oak Hill Junior High School during the day, but continued to coach at Northfield after hours.

McKenzie joins other Plymouth School coaches and former coaches who have been into the Hall of Fame including: Daniel Tyree, Charlotte Tyree, Jane Faulstich, and David McKenzie.

Hall of Fame inductees are not informed ahead of the ceremony that they have been selected. Special guests invited to the ceremony were McKenzie’s parents, Joe and Nancy Erp, sister and brother-in-law, Charlotte and Daniel Tyree, and children Emily and Trent McKenzie.

Plymouth Schools superintendent and former PHs Speech Coach, Daniel Tyree said, “This award given to Sarah is a testament that not only is the PHS  Speech team a solid program, but the feeder program that she heads up at LJH is one of the reasons that Plymouth Speech programs continue to have success.”