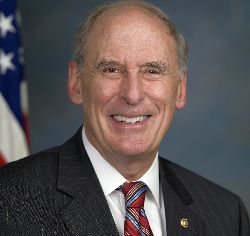 09/12/13 Senator Dan Coats (R-Ind.), a member of the Senate Intelligence Committee, Tuesday issued the following statement regarding the Senate resolution to authorize a U.S. strike against Syria:

“After several briefings with administration officials and military leaders, gathering input from Hoosiers and hearing today directly from President Obama, I do not believe a targeted, limited military strike on Syria is in the direct national security interests of the United States. Therefore, I do not support a resolution authorizing the president to take military action in Syria.

“There is no doubt that the Assad regime used long-banned chemical weapons to murder its own people. This horrific act demands a worldwide response of condemnation. However, the president has not justified his request to engage the United States militarily in Syria.

“As a result of Russia’s recent proposal to work with the United Nations to secure and destroy the Syrian stockpile of chemical weapons, the president announced today that he would like to delay a vote on the Syria resolution and give diplomacy another chance. Reaching an agreement at the United Nations is one thing, but trusting that Syria and Russia will abide by the terms is another matter. Additionally, there remain numerous challenges for the United Nations to secure and destroy these chemical weapons in the midst of a civil war.

“This accidental diplomacy should not be mistaken for a credible plan. The president’s failure to lead over the past five years and communicate a vision for the Middle East region threatens the credibility of our country. To maintain America’s strength and integrity in the world, the president must demonstrate that any U.S. military action in the Middle East is related to a direct national security threat and part of a long-term strategic plan, which the administration has yet to define.”