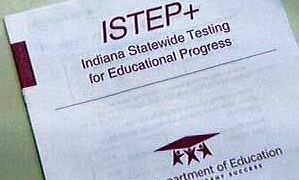 09/10/13 The headlines for months have talked about problems with ISTEP+ testing in Indiana. According to the Indiana Department of Education (IDOE), schools and parents were due to receive the spring ISTEP results on September 9. Parents must have an access code to get the results over the internet by going to INORS (Indiana Online Reporting System and/or Indiana Parent Network.

According to Inside Indiana Business, some 1,400 scores will be invalidated because of computer problems during the testing period.

Approximately 500,000 students took the ISTEP+ test that covers both math and language arts shortly before the end of the 2012-2013 school year. As many as 1,100 math and 260 language arts results will be invalidated. The test is given to students in grades 3-8. High school proficiency is now tested with end of course assessments.

CTB McGraw-Hill administered the test; but experienced problems when the number of students taking the test online at any one given time overloaded their computer capacities. Test results should be made public by September 17 in a public press release. The release is expected to contain summary reports at the individual school level, corporation level and the state level.

Schools will only have until September 30 to complete a school improvement plan where necessary or required for low performances. School corporations’ administrators are then mandated to have teacher evaluations completed by October 7; giving them only a week between reports.