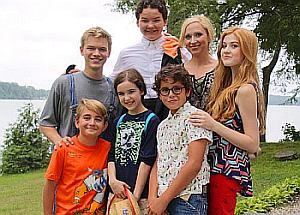 08/30/13 The filmmakers behind, and some of the stars of the movie “Little Savages,” which filmed in Culver this month, will join local clergy for a panel discussion on the topic of “Faith, Film, and Contemporary Life” this Saturday, Aug. 31, starting at 11 a.m. at the west pavilion of Culver’s town park.

Stars of the film include several well-known Disney stars, including Kenton Duty and Katherine McNamara.

The film is being produced by Bearfruit Films, whose leaders have said they hope to “bring redemptive stories to life” in their movies. The discussion, to which the public is invited, is intended to explore the confluence of faith and art — most specifically film — in today’s society, and how those matters have influenced Bearfruit. Participating local clergy or church representatives will weigh in, as will Bearfruit representatives and actors from the film. Discussion will also include future endeavors for the company.

The event is followed by a community autograph signing party from noon to 1 p.m.