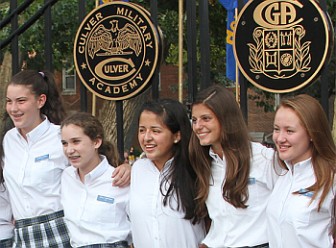 Classes started on Tuesday, Aug. 27, with 810 students, which is the highest total enrollment since the 1982-83 school year. There are 475 boys enrolled in Culver Military Academy, which the highest number of cadets since 1984-85, and 335 girls enrolled in Culver Girls Academy. Culver’s student body hails from 40 states and the District of Columbia, and 25 countries. A total of 92 students come from the local area.

After the ceremony the 810 students, faculty, and staff gathered for the opening convocation in Eppley Auditorium. During his opening remarks, Head of School John Buxton talked about the 2013-2014 school year being one of transition with changes in the school’s leadership, the Class of 2014 assuming leadership roles, and new students arriving on campus.

“Transition is a process: and so is Culver. That’s the magic of this school,” he said. “Culver is the vehicle for your transitions, whether they are into Culver, through Culver, into adulthood, or even to a more professional or comfortable version of yourself. The opportunity in transition is usually clear and obvious, and the challenge is made all the more manageable by the community that surrounds you tonight.

“You are all now a part of a Culver community that can and will support you. It will help you meet the challenges of transition as well as help you take full advantage of the opportunities you have as your transition here begins and/or continues.”

Monday morning the new students were bused to Logansport to see firsthand the site where nearly a century ago cadets helped to save residents from the flood of 1913. New CMA cadets also experienced first-hand the difficult task of rowing boats similar to those used by the cadets in March 1913.

Logansport city officials called upon Culver to help rescue residents trapped by the flooded Eel and Wabash rivers. Culver sent some 40 cadets who were experienced in handling the summer Naval School’s four cutters, each boat about 25 feet long and weighing more than a ton. Over a 48-hour span the Culver cadets carried hundreds of people to safety whom were stranded on rooftops and on second stories.

A campus landmark, Logansport Gate was a gift in 1914 from the city of Logansport in gratitude for the rescue efforts provided by Culver cadets. The gate was refurbished as a gift from the Class of 2001.

Cutline: Some of the new Culver Girls Academy students gather in front of the Logansport Gate Monday evening. They are (left to right) Elanna Reavill-O’Toole (of Culver), Emily Hartman, Maria Lopez, Victoria Styers (of Plymouth), and Emma Doherty.