Miller’s Residents Enjoy Presentation on “The Golden Age of Radio” 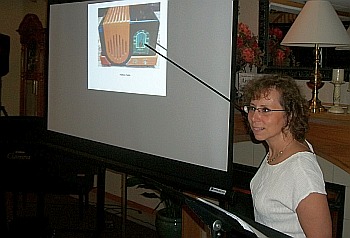 08/27/13 In honor of NATIONAL RADIO DAY which was Tuesday, August 20th, volunteer Annette Ray designed a slide show presentation  titled “The Golden Age of Radio” for the residents of Miller’s Senior Living Community.  Ray, who enjoys researching topics, found quite a bit of information about different types of radio and the impact of radio on the United States as a nation.

Ray’s presentation began by explaining the simplest type of radio which is a “crystal” radio.  It contained no real power source.  It did not use a battery nor did it use electricity.  Crystal radios were easy to make, however the sound was faint and one needed to listen very carefully or use earphones to hear the sound.  The radio was first used for government use.

As the radio became more perfected, its use became widespread among the general public.  Before television’s invention, people relied on the radio for information about all sorts of things.  They listened to learn about the weather, crop prices, political campaigns, sports, news, and of course, entertainment.

Ray enhanced her slide show presentation by using audio clips of different historical events with which many of the residents in the audience could identify.  She shared audio of Eleanor Roosevelt speaking during  her radio talk show; Big Band remotes; the news report of Charles “Lucky Lindy” Lindbergh completing his first solo transatlantic flight; and Helen Ward singing with the Benny Goodman Band.  She also shared clips of favorite serial programs including Amos and Andy, Red Skelton, and The George Burns and Gracie Allen Show.  Also, generating a lot of discussion were radio commercials including Maxwell House, Wrigley’s Spearmint Gum, Chesterfield Cigarettes, Mobile Gas, Alka-Seltzer, Red Heart Dog Food, and Aunt Jemima.  Ray’s presentation was well received and brought back many fond memories for the residents of the “Golden Age of Radio”.

Photo:  Annette Ray  points out  a 1940 Addison Radio during her “Golden Age Of Radio” presentation at Miller’s Senior Living during National Radio Day.