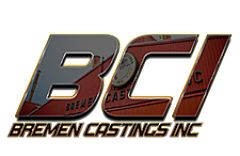 08/22/13  Executive Director of the Marshall County Economic Development Commission, Jay Bahr released information on Bremen Castings being named one of the top growing companies in the US.

With 67% growth over the last three years, Bremen Castings was named as one of Inc. Magazine’s 5,000 fastest growing companies in the United States.  The company was ranked 4,017 up from its 2012 ranking of 4570.  The ranking puts the company at number 59 out of the 69 Indiana companies making this year’s list.

Bremen Castings operates a foundry and CNC machine shop that fabricates recycled metal products. Its products include items for the agricultural market, lawn and garden industry, and the heavy truck manufacturing market. It uses a large percentage of recycled scrap metal that is molded and machined in-house.