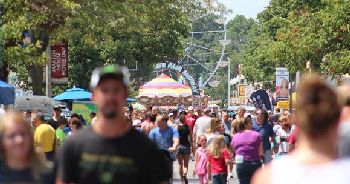 08/20/12 Consistently sunny skies and below normal temperatures coupled with new exhibits and popular promotions helped the Indiana State Fair set a new total attendance record.  The 157th edition of the fair, which wrapped up Sunday, attracted 978,296 people through the gates – 4,394 more visitors than the previous record of 973,902 in 2009 and a 15 percent increase from last year’s total of 853,941.

“From the weather to the programming, everything seemed to work this year,” State Fair Executive Director Cindy Hoye said.  “We knew we would have a challenge with the Coliseum under construction and more schools moving to a balanced calendar, but our plan and the weather worked out well and we are very proud to have hosted so many people.  It’s been one of the most memorable fairs we’ve ever had.” 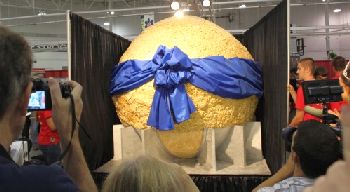 Topping the list of memories may be the 6,510 lb. popcorn ball the fair created and placed on display throughout the fair.  People flooded into the Ball State Agriculture & Horticulture building to have their photos taken with the ball that measured 8 feet across and broke the world record by nearly 1,500 lbs. 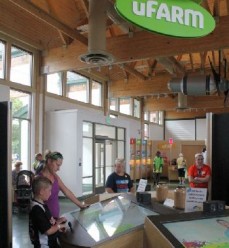 The Glass Barn, a 4,500 sq. ft. facility built and programmed by the Indiana Soybean Alliance, drew rave reviews from fairgoers and the ag industry alike.  Its engaging interactive games and exhibits educated consumers about modern production agriculture throughout the fair’s 17-day run.

Overall, the fair broke three daily records with crowds of 70,331 on the first Sunday (Aug. 5); 67,702 on the first Tuesday (Aug. 7); and 80,634 on the second Tuesday (Aug. 14).  The fair’s Turkey Hill Dairy $2 Tuesday promotion has become an event fairgoers anticipate.  Other special promotions also helped draw in customers, including the new $5 Friday with Fair Foodie specials on Aug. 16.

A steady stream of great concerts on the Marsh Free Stage saw fans flock there by the thousands each night.  The Happy Together Tour, Kevin Costner & Modern West, Styx and Montgomery Gentry were just a few of the shows that drew them there.  Other popular attractions this year included the Sinbad High Dive Show, Rosstyn Ice Show, Get Animated! and the Great American Frontier Show.

With less than an inch of rain and an average temperature of 84 degrees during the fair, visitors were quite comfortable throughout the event.  The fair expects to announce next year’s featured agricultural commodity in the coming weeks.