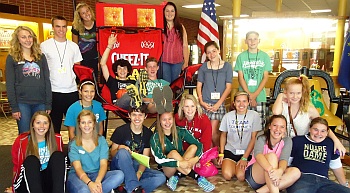 08/19/13 Argos Jr.-Sr. High School hosted a New Student Orientation on Thursday, August 13th for 21 new students that were entering grades 7-12.  This event occurred on Teacher Work Day – the day prior to school starting for students so that the new students could become acquainted with each other, the building and with the staff.  These students include families that have moved into the Argos district, students that live in other districts and are choosing to come to Argos Community Schools and two exchange students from Viet Nam and Brazil.  The overall enrollment for Argos Jr.-Sr. High School currently stands at 315 which is an almost 10% increase in enrollment from enrollment figures recorded a year ago.

The New Student Orientation was hosted by the Guidance Department and assisted by Student Council representatives.  New and existing students introduced themselves by sharing their name, where they were from and something unique about themselves.  They then divided into four groups of eight students in which they competed against each other to see which group could put themselves into correct alpha order quickly by first name, last name, middle name, nickname, state of birth, town lived in last year, etc.  They also put themselves into correct numerical order by using date of birth, month of birth, age, etc.   This definitely got students mixing and moving – especially entertaining was hearing all the nicknames shouted as they arranged themselves in order.  A candy reward was given to the winning team.

Next students sat in a large circle and played “I Have Never” where they tried to gain a seat in the circle by stating a true fact that they had never done but hopefully several others had done so that they would be forced to move and someone new would be in the center to share something they “had never done”.  This drew some interesting conversation about things these students had never done.

Before ending the event with a shared luncheon, the four teams were given clues and autograph sheets to compete in a Treasure Hunt throughout the school.  The clues took them to eight different parts of the school using directions such as “head to the place you will receive year-end awards”.  Student Council members assisted each group of new students but could only answer Yes or No to questions and could not physically lead the group but could get the group’s attention by standing still to indicate that a wrong direction was being taken.  The signature page was arranged with staff members names listed alphabetically along with their teaching area and leadership role in the school  – Like “Math teacher & Head Girls Soccer Coach”.  Each name and description was followed by a line designed for that teacher’s signature to written upon.  Points were awarded as 1 point for the signature, 2 points for the signature of teacher on that student’s actual schedule, 5 points for the signature given while the teacher was wearing Hillbilly teeth given to the staff by the principal previously.  Signatures were secured while groups ran through the school following their clues.  The winning team received a Gift Certificate to Subway and all participants received a large candy prize.  Individual winners of the Staff Signature Activity received Gift Certificates to Java Trail.  Most importantly, all involved became acclimated to a great place to call home – Argos Jr.-Sr. High School! 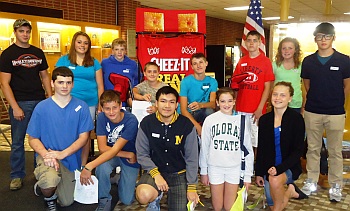 The students broke into groups and did a treasure hunt throughout the K-12 building.  Along the way, they earned points by gathering signatures of staff members.  To do this, they had to introduce themselves and shake hands.  They were assisted by current Argos students (also pictured).