Anglemyer Sentenced to 30 Years of Imprisonment for Attempted Murder 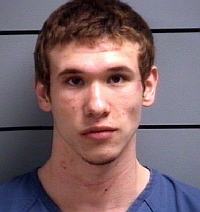 The incident occurred on January 30, 2013 in the 200 block of S. Washington St. in Bremen at approximately 10:30 am.  Anglemyer was accused of breaking into his former girlfriend’s home and abducting the young woman by dragging her to another home on Woodies Lane.  There he hit the woman several times with a screwdriver and shaved her head as she was in a semi-conscious state.  Anglemyer then wrapped an electric cord around her neck and choked her until she lost consciousness.

When Bremen Police confronted Anglemyer about the woman’s whereabouts, he responded that, “She’s dead.”

Chief Deputy Prosecutor Nelson Chipman stated in open court that “this is a case of escalating domestic violence.  Mr. Anglemyer was convicted as recent as October 26, 2012 in Pike County for domestic battery on the same victim.  The No Contact Order and probationary period seemed to have no effect to deter the incident.  It came so very close to an unthinkable tragedy but for the quick action of the Bremen Police Department.”

Judge Bowen sentenced Anglemyer to the term of imprisonment of 30 years with 5 suspended as agreed to by the parties.