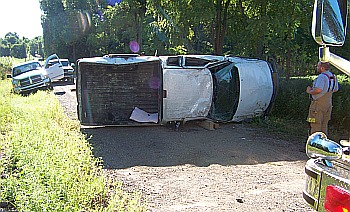 08/15/13 A single vehicle crash on 4th Road Wednesday morning ended with a Plymouth woman being airlifted to a South Bend hospital.

23 year old Katie Beason was traveling eastbound on a gravel section of 4th Road just east of the intersection of Rose Road in a 2000 Chevy S10 pick-up.  The truck went off the north side of the roadway and into the ditch.  IT then traveled back onto the roadway and rolled over approximately 1 ¾ times before coming to rest on its right side, pinning Beason’s arm under the vehicle.

Katie Beason was airlifted from the scene by Samaritan to Memorial Hospital for injuries she sustained in the crash.

First Sergeant Neal Wallace with the Marshall County Sheriff’s Department is investigating the crash.  Although the crash is still under investigation speed is believed to be a factor.

The Marshall County Sheriff’s Department was assisted at the scene by the Polk Fire Department, Plymouth Fire and Walkerton and Plymouth EMS.