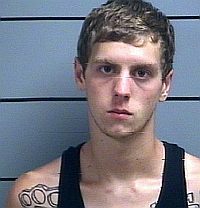 08/14/13  On Tuesday, August 12th at 6:30 a.m. the Plymouth Police Department received a report of an unwanted  person being inside a residence in the 1300 block of West Madison Street.  Arriving on the scene, Detective Leo Mangus located  21 year old Travis Hill of Bristol, Indiana inside the home.  The residents of the home had been away for the evening and when they returned home found Mr. Hill sleeping inside.

Travis Hill had been in an abusive relationship in the past with one of the residents.

Evidence revealed that Mr. Hill had pried open a window to gain entry into the home.

He was taken into custody and transported to the Marshall County Jail and held on charges of Residential Entry and Criminal Mischief and booked on a $5,005 bond.