08/13/13 An agreement between the Plymouth School Corporation and the City of Plymouth will add yet another layer of safety for students and staff returning to school this week. 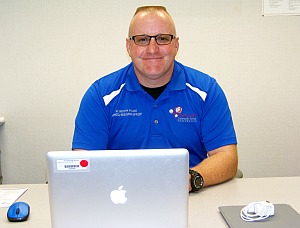 At the August 6 meeting of the School Board, Plymouth Police Officer Ted Brown was introduced as the incoming School Resource Officer (SRO) for both the Plymouth High School and Lincoln Junior High. This is a newly created position. At that meeting, Brown indicated that he would be spending approximately 60 percent of his time at PHS and the remaining 40 percent at LJH.

Plymouth Schools Superintendent, Daniel Tyree, called Brown a “magnet for kids” as he explained that the position is built on making relationships with students. Tyree said, “He is a PHS graduate, has been an assistant coach for the football team for 13 years, and he is always ultra professional.”

The parameters of the position were introduced at the August 12 Plymouth Board of Works meeting as well. The Board voted 3-1 in favor of accepting the memorandum of understanding between the schools and the Plymouth Police Department. Don Eckert cast the lone no vote citing his feelings that the compensation for the SRO was not equal to the number of hours being committed to. The Board voted unanimously to accept the job description. The Plymouth Schools’ portion of Brown’s compensation will be two payments of $10,000 each. Brown will retain his status as an officer of the PPD and could be called to emergency situations in the community.

Council member Duane Culp was absent from the meeting.

Brown will report to the Assistant Police Chief and the Chief of Police regarding the day-to day duties as they relate to the SRO. He will also need to coordinate with the Plymouth Schools Superintendent, staff and the Director of Safety and Security as spelled out in the memorandum of understanding between the two entities. Before the meeting, Plymouth Mayor Mark Senter said he did not conduct the interviews for the position, but believes Brown is an excellent choice.

The Plymouth Schools named James Phillips only a few weeks ago as the Director of Safety and Security. Both Brown and Phillips will wear blue shirts with their titles embroidered on them as easy-to-spot identification. Portions of the school’s safety plan include the following: “Protects against outside threats to the physical safety of students; prevents unauthorized access to school property; and secures schools against violence and natural disasters”.

Brown will investigate any criminal activities that are adjacent to the school property and will only participate in any internal investigation within the schools as the request of a principal or principal designee. Others duties include, but are not limited to: Counseling students in special situations, answering questions that students may have about Indiana Criminal or Juvenile Laws, to provide traffic control during arrival and departure of students as needed, serve as a liaison between the school, community agencies and the Police Department, and to formulate educational crime prevention programs. He could be additionally assigned to assist other law enforcement officers with outside investigations concerning students attending the schools to which he is assigned.

Much of the activities of the SRO will be to improve the overall image of uniformed law enforcement officers for both students and the community. The SRO will be expected to attend major school activities, student organizations, and major athletic events as needed or feasible.

Ultimately, the SRO could be called upon to testify in court of legal proceedings, control disorderly or irate persons, and perform complex tasks during life threatening emergencies.

Brown has already successfully completed the training requirements that have been established under Indiana code. The requirement is at least 40 hours of specific training.

The position of SRO is for 180 days (school year) and will begin on August 14 this year.

It will be within the power of the SRO to make an arrest, conduct a search or a seizure of a personal property using the reasonable suspicion stand, carry a firearm on or off school property, and exercise other police power with respect to the enforcement of Indiana laws.

Both the Plymouth Schools and the City have the option of renewing or terminating the assignment of a SRO in following school years.