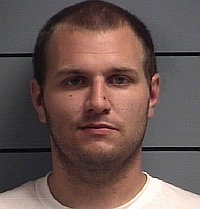 08/08/13 On Tuesday, August 6,  about 2 a.m. Officer Nick Young of the Bremen Police Department attempted to make a traffic stop at Bowen and Mill Streets in Bremen. The vehicle fled southbound and continued south from Bremen onto Fir Road. The pursuit lasted for several miles with speeds at times exceeding 100 mile per hour. The vehicle pursuit ended on Fir Road just south of 10th Road when the suspect pulled the vehicle into a yard and fled on foot. Bremen Police Department K-9 Quido tracked the suspect from the suspect’s vehicle to a barn surrounded by thick and heavy vegetation. Quido then led Officer’s into the thick vegetation locating the suspect who was lying down. The suspect was then taken into custody by the officer’s.