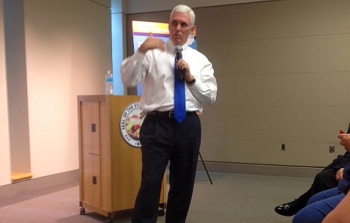 08/02/13 Indiana Governor Mike Pence held his first town hall meeting since taking office on Wednesday.  Pence was already in Ft. Wayne where he welcomed Frontier on Tuesday night. After making a few introductory comments, Pence took questions from the audience for over an hour and then met with attendees on an one-one basis after the meeting.

Pence began the questions portion of the meeting saying he only had two ground rules. Pence said, “Please share your first name with me as you ask a question and call me Mike.” “I’m pretty old school about town hall meetings.” he said. He then gave those in attendance the green light to simply make comments if they preferred.

Pence said it is a time of extraordinary progress. “Indiana is strong and growing stronger.” he said. He then referred to several key things the state is doing right in the areas of balancing the state budget, education reform, infrastructure, and innovations. According to Pence, the state has passed a balanced budget and held the line on spending. He said the state will have a surplus of $100 million dollars for the next two years.

Part of his approach to balancing the budget is new tax relief for Hoosiers. He said, “Indiana is the lowest taxed state in the Midwest. We have a statewide moratorium on new regulations and doing a comprehensive review of existing regulations.” “We want to clear out the underbrush of red tape.” he said.

Speaking directly to infrastructure, Pence said, “We have $800 million for roads and bridges with $200 million for local governments.” “I believe roads mean jobs and not just road jobs,” he said.

According to Pence, Indiana is experiencing faster job growth than 42 other states. “He said, “We expect job growth and falling unemployment over the next several years.” He added, “There are still a lot of people in our state who are hurting.”

Pence said, “We need to give parents and teachers choices. Parents need to have more opportunities to choose public, charter or private schools. Indiana needs to be the national leader in education.”

Pence said that the majority of high school dropouts were making passing grades while in school. “They are not thinking out of school-they are dropping out.” he said. He commented for several minutes on the need to have vocational classes in high schools for those who want to begin working right out of school as well as encouraging students to pursue a college education. He said, “The curriculum has to include relationships, rigor, and relevance.”

Creating the most response from the audience were the comments from former teacher Connie Kovas Moreno and retired teacher Phyllis Bush. Both urged Pence to separate the state from Common Core. Kovas Moreno called Common Core an “educational minefield”. Pence said he is skeptical of Common Core. He said, “I believe education is a state problem.” He added, “Our state Board of Education voted unanimously to review Common Core.”

Pence has been talking about Common Core since he took office. Shortly after he took office, he coined the term “on pause” to identify the state’s current position. He said, “I believe our standards should be written by Hoosiers for Hoosiers.” 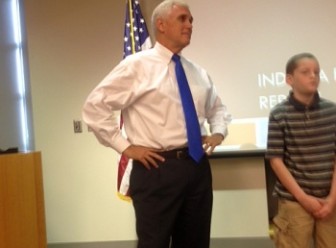 Responding to a question concerning the interruptions that took place during the ISTEP testing in late April and the beginning of May, he said, “I do believe that performances measured are performances enhanced.” He commented that despite the interruptions scores were higher on the ITSEP tests than ever before. He said, “If you’re not keeping score, you’re practicing.”

Handouts at the door and posters displayed in the meeting room spoke to state-based initiatives. According to Pence, the initiatives are for prompting job creation, economic development, Hoosier ingenuity, and the principals of Federalism. Speaking to the newly created Office of State-Based Initiatives, the handouts spelled out how the state will interact with the federal government concerning grants. The Office of State-Based Initiatives will subject all federal grant opportunities to cost-benefit analyses and when necessary, will tell Washington, “Thanks, but no thanks.”

Pence referred the Tenth Amendment saying, “The Tenth Amendment enumerates the principle of Federalism: “The powers not delegated to the United States by the Constitution, nor prohibited by it to the states, are reserved to the States ,or to the people.”