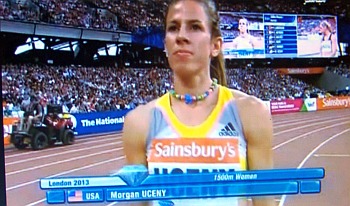 07/30/13 Plymouth and Marshall County’s Olympic Champion Morgan Uceny participated in the Sainsbury Anniversary Games in London this past Friday.  Morgan, a professional middle distance runner from Plymouth was back in the stadium where she stumbled to the track during last year’s Olympic finals in the 1500.  The fall was a devastating blow that took her a while to get over.  She actually was injured in the fall and had to take several months off before heading back to regular training.

On Friday Uceny started the race on the inside lane and was quickly bunched up with the rest of the field.  About half way into the race she dropped to the back but in the 3rd lap moved to the outside and began her move toward the front.  In the final lap you could see her pour it on as she was in 5th place.  At the finish line her team-mate Mary Cain crossed just in-front of her with a 5th place finish at 4:09:77 to Uceny’s 6th place finish at 4:09:79.

Following the London race Morgan headed off the Barcelona for 2 ½ weeks of training camp.