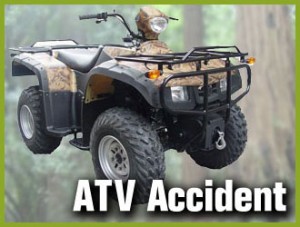 07/15/13 (Tippecanoe) Indiana Conservation Officers investigated a personal injury ATV accident which occurred on Tuesday, July 9th at approximately 4:30pm. Zolyn Perman, 12, and his brother Zen Perman, 14, were both thrown from the ATV they were riding on when it struck a utility pole.

Zolyn Perman was operating the ATV and Zen Perman was seated on the ATV behind him. Zolyn was in a gravel driveway on private property and was attempting to drive the ATV around a utility pole to put it up for the evening.

The ATV was estimated to be traveling 30mph when the accident occurred and the speed and gravel did not allow for the ATV to turn as sharply as Zolyn intended for it to. The ATV slid into a utility pole throwing both occupants from the ATV as they landed in the grass.

Both victims were treated at Woodlawn Hospital in Rochester for their injuries. Neither victim was wearing a helmet or protective clothing. Indiana Conservation Officers strongly recommend that all occupants operating or riding on an ATV wear helmets and protective clothing to minimize the risk of injury should an accident occur.

Many ATV’s are not recommended to be operated by anyone under the age of 16. Please consult your owner’s manual for age restrictions and abide by any warning placards which may be present on your ATV.