06/28/13  On Wednesday, June 19th about 2:00 P.M. Marshall County Sheriff’s Deputy Jonathan Bryant conducted a traffic stop in Burger King parking lot on a Volkswagen for numerous infractions.   During the investigation Plymouth Police Officer John Weir and K-9 Jax were requested to assist.  As Jax searched the vehicle he made a positive indication for the presence of narcotics.  A search of the vehicle was conducted. Officers located numerous forms of synthetic marijuana.  The driver of the vehicle, 27 year old Amanda J. Rhoades-Werb  of Plymouth was taken into custody.  She was transported to the Marshall County Jail on a possession of synthetic drug charge and held on a $1,505 bond.  Werb was given a July 23rd, Superior II Court date. 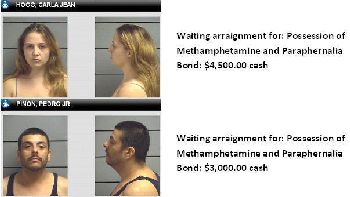 On Tuesday, June 25th at approximately 8:50 A.M. Deputy Bryant conducted a traffic stop on a Pontiac Grand Prix in the Pilot Travel Center parking lot at King Road and US 30.  During the investigation the driver, identified as 39 year old Charles Salach of Plymouth was found to be driving while suspended with a prior charge.  He was also found to be in possession of methamphetamine.  Salach was taken into custody and transported to the Marshall County Jail and held on a $1,505 bond.  He received a July 30th Superior II court date.