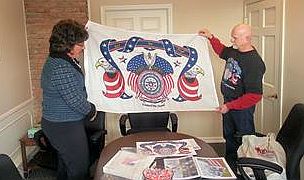 02/04/13 On behalf of The Spirit of American Foundation, Congresswoman Jackie Walorski (IN-02) received an honorary flag at her district office earlier today.  The flag was presented by Mishawaka naval veteran Dale Hemphill, founder of the veteran non-profit organization that recognizes our fallen heroes across the country.

“The Spirit of America flag symbolizes a powerful tribute to our nation’s brave veterans, especially those who made the ultimate sacrifice to protect our country,” said Walorski, a member of the House Armed Services and Veterans’ Affairs Committees.  “As the daughter of an Air Force veteran, I am deeply humbled to receive this flag and look forward to serving our military men and women in Congress.”

The Spirit of America flag, first designed in 1979, was previously awarded to four American presidents and many veterans across the country, including Frank Buckles, the last surviving American WWI veteran.  These flags currently fly over multiple United States military bases and are displayed in F-16 jets and C-130 planes in Afghanistan.  The insignia represents American battles, symbolizing historical recognition for America’s fallen heroes.

The flag will be displayed outside Congresswoman Walorski’s Mishawaka district office.