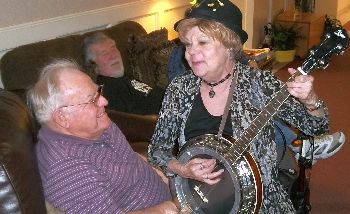 01/14/13 Banjo player Trilly Cole of Kouts entertained at Miller’s Senior Living Community on January 7th.   Activity Director Cindy Flagg introduced Trilly by admitting how anxious she was to meet her in person.

“Trilly is such a fun name,” exclaimed Flagg!  “”After speaking to her on the phone and with a name like Trilly, I just knew we were in for a good time.”

Sporting banjo earrings and wearing a hat with banjo tack pins, Cole took brought her banjo out of its case began picking.   Her first song was “Oh Them Golden Slippers”.  She sailed right into “Five Foot Two, Eyes of Blue”.  Between songs Cole kept the audience on their toes with corny stories and bits of trivia.  She also shared her musical story about how she started in the entertainment business.

Cole was born in LaPorte, In. and took to the stage by singing at the age of three.  By the age of six she played the guitar.  At ten she had learned several other instruments.  Then a neighbor dug an old banjo out of his attic and told Trilly if she could learn to play a song on it within one week, she could keep the banjo.  She wanted that banjo and by the end that week she learned to play “Hey Mr. Banjo”.  She kept the banjo and has been playing ever since.  She also began her own band at the age of ten.  She appeared on Ted Mack’s Armature Hour and was then on the road at the age of 18.

Cole’s musical career took her to Printers Alley in Nashville where she played at the well-known Captain’s Table for fifteen years.  She moved on to Las Vegas, Detroit and other musical venues where she was the opening act for many well-known country stars.  While in Michigan she was endorsed by Gibson Guitars.

Cole’s song selection was a hit with her audience as her musical choices brought back so many fond memories of childhood and teen years.  She encouraged audience participation on songs such as “Baby Face”, Camp Town Races”, “Back Home Again In Indiana”, “I’ll Be Loving You, Always” and “Yes Sir That’s My Baby”.

There were several surprises during Cole’s concert.  The audience was amazed when she was able to play “Dueling Banjos” by herself. She also shared a song which was written just for her by Junior Waters.

The song drew chuckles from the audience as she sang it.  After a few more traditional songs that everyone knew, Trilly ended her program with a song she wrote.  It was a parody of Willie Nelson’s song “On The Road Again”.  Cole’s song was titled “On the Commode Again” which was quite a hit with the audience.

Cole will be scheduled to appear at Miller’s again in the near future.  To receive the Miller’s monthly schedule please call 574-936-9801 and ask for Anna Corbett or Cindy Flagg.