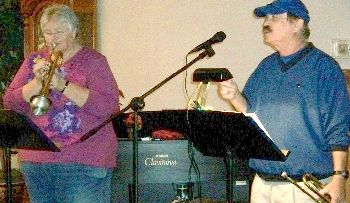 12/04/12 Jerry Kreamer of Monrovia, Indiana paid a visit to his step-mother, Ivy who resides at Miller’s Assisted Living in Plymouth over the Thanksgiving weekend.   When Jerry visits he does not come empty-handed.  He brings his trumpet with him and treats Ivy and her friends to a concert of wonderful trumpet music.  His concert consisted of fun, Disney tunes, country, jazz, gospel hymns and patriotic music.

The patriotic portion of the concert was put together to honor all the veterans in the audience.  Kreamer displayed a photo of his father in his military uniform and shared a few stories about his dad.  Kreamer has much admiration for the men and women who have served their country and are still serving today. The patriotic set of music included  “You’re A Grand Old Flag”, “America”, Battle Hymn of the Republic” and “God Bless America”.

Kreamer invited Miller’s Activity Director Cindy Flagg to join him on several of the tunes including the patriotic set, “Satin Doll”, “Green, Green Grass of Home”, “Do Lord”, “Dream A Little Dream”, and several others.   Kreamer and Flagg played duets as well as alternated between playing and singing.   Residents joined in on sing-a-longs such as “You Are My Sunshine” and “God Bless America”.

Kreamer will return to Miller’s on December 14th at 2:00 p.m. for a concert of Christmas music.   The public is invited to attend the concert and enjoy the trumpet styling’s of Jerry Kreamer.  Flagg will once again join him on several selections.  The concert is free.  For more information call 574-936-9801 and ask for Anna Corbett.