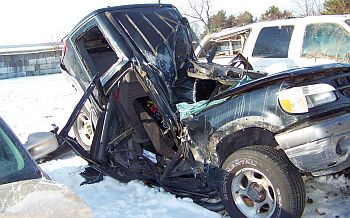 01/05/11  Marshall County Coroner Bill Cleavenger released further details Wednesday afternoon pertaining to the death of 28 year old Richard ‘Ricky” Dennis III of Knox.   The single car accident occurred Tuesday night west of Plymouth. Dennis was west bound on 9th Road between the railroad tracks and Quince Road when his vehicle left the roadway and struck a tree on the north side of the road. The accident happened at 6:08 PM and Dennis was killed instantly upon impact. Plymouth Police, Fire and EMS responded immediately to the scene.

The Indiana State Police accident reconstruction unit arrived and began a full investigation. All Plymouth units remained at the scene while the reconstruction took place. The vehicle was registered to another person and no identification was found on the victim. The Indiana State Police went to Starke County to further investigate and learned that the vehicle was owned by the victim’s mother of Knox. 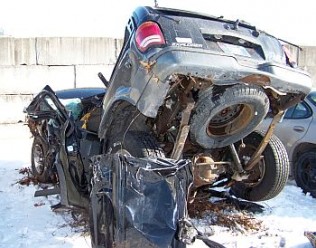 Cleavenger said that preliminary indications are that Dennis was westbound on 9th Road at a high rate of speed when he crossed the railroad tracks and lost control when his car came in contact with the snow covered road on the opposite side of the crossing. The car then went out of control and wrapped around a large tree on the north side of road about an eighth of a mile from the crossing. Dennis was not wearing his seatbelt.  From the severity of the crash there is no way that Dennis could have survived according to the coroner.

Further investigation is underway including toxicology tests which are standard policy in any fatality. High speed and reckless driving seem to be the principal factors as of now according to the coroner. Plymouth Fire, EMS and police remained on scene and the road was closed until after 10:30 last night.

Preliminary investigation by the Indiana State Police revealed that the driver of the west bound Ford, Richard L. Dennis III, 28, of Knox was driving too fast for the icy road conditions.

The state police were assisted at the scene by the Plymouth Police Department, and Plymouth Fire and  EMS.  State police are investigating reports that Dennis may have been involved in a hit and run accident in Plymouth shortly before the fatal crash on 9th Road.