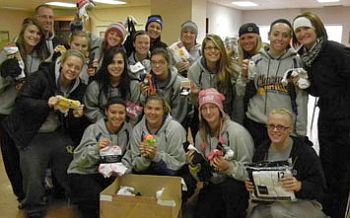 12/26/11 Starting with their fall season in 2010, the Ancilla College softball team initiated a new service project. Instead of collecting admission at their games and scrimmages, they would accept a pair of new socks. The idea was the brainchild of Ingrid Reese, wife of Ancilla coach Scott Reese.

“We were looking for something that would help our community,” mentioned Ingrid. “We were able to keep track on a game-by-game basis of what was being collected and continued to look forward to the time where we could deliver them to those in need.”

That time arrived near the end of this semester for the Lady Chargers. After collecting over 200 pairs of socks, the softball team made the delivery to The Center for the Homeless in South Bend and took a tour of the facility.

“I didn’t want to just collect socks. I wanted it to be a project that involved taking ownership and getting involved,” said Coach Reese.

Sophomore Rosie Banks summed up the trip with her comments. “It was fun to see how excited everyone got when they found out how many socks we brought up. To us it was something small like a pair of socks, for them it was the fact we were trying to help.”

The tour not only provided chances for the girls to see the facility, but to ask questions and meet some of the residents. After the tour, plans were made by many of the girls to return to help out at The Center in the future.

“I think we’ll keep it going,” said Reese. “After seeing the facilities, the girls were excited and looking for opportunities to go back and help. It started out with just an idea and a pair of socks. I’ve enjoyed seeing it blossom into more opportunities for involvement and seeing how each individual can help others.”