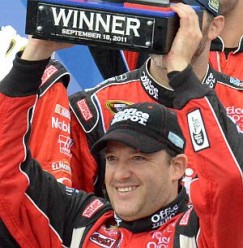 12/13/11 Looking for that special gift for the Tony Stewart fan in your life? Consider a ticket to see the 2011 NASCAR Sprint Cup Champion racing at Plymouth Speedway. Just in time to stuff the Christmas stockings, advance tickets went on sale Friday, Dec. 9. Visit ETIX.com to make your purchase.

The Plymouth Speedway is planning a 1/5-mile dirt track this season, which will include 60-foot-wide turns with 5-foot banks and straights at 50-foot with 2-foot banking. The dirt track was designed by Chili Bowl Midget promoter and ASCS Sprint president Emmit Hahn and long-time Macon Speedway promoter Bob Sargent, who say that the bullring dirt track with the small size will make for some awesome racing. With the small track, horsepower will come into play. Small tracks bend race cars; big tracks break race cars. If Mother Nature is good to the area, the first dirt track race is set for May 5 with the Non-Wing Sprints and Modified. Stewart’s SOD race June 16 – “Battle in the Bullring” – is the second scheduled dirt event and then a two-day Plymouth-Palooza USAC Midget race July 6-7 will see Friday night asphalt racing and Saturday night dirt track racing. This year’s dirt track theme: “Come to a party where a race will break out!”

Stewart, who put on a valiant performance to clinch the NASCAR Sprint Cup Series at Homestead, Fla. in November, passed 118 cars in that race and bounced back from as far as 40th in the field. He relentlessly chased after points leader Carl Edwards, who finished second in both the Homestead race and the season standings after a tie-breaker was decided by wins. Homestead was Tony’s fifth win of the final 10 races of the 2011 season.

The 40-year-old Columbus, Ind. native has won 12 championships since 1978, when he then drove go-karts. He is a three-time Sprint Cup champion; a four-time USAC champion where he won the “Triple Crown” (Midget, Sprint and Silver Crown series) in 1995; a 1997 IRL IndyCar Series champion; and several kart championships among other honors. Stewart credits his father, Nelson, who he says, “never let me settle for second… he pushed me to do better.”

Stewart, a driver/owner for Stewart-Haas Racing in the Sprint Cup series, also owns TSR (Tony Stewart Racing) fielding teams for the World of Outlaws and USAC where he has won 15 owner championships. He also is owner of Eldora Speedway in Rossburg, Ohio as well as having a hand as part-owner at other tracks and other teams, including a motocross team for Eric Saunders, of Lakeville. Saunders raced for TSR for 13 years before a crash that shortened his career on Aug. 29, 2010. Saunders is the track promoter of Plymouth Speedway.