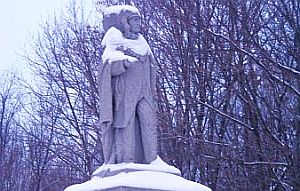 01/11/11  The National Park Service has listed the Chief Menominee Site to the National Register of Historic Places.

During the last week of December the National Register of Historic Places in Washington, D.C. notified Kurt Garner of the distinction.  He said, “This is significant for a number of reasons, but probably most interesting is that the NPS does not typically list memorials, however it was felt that Menominee was of particular national interest.”

Garner explained that he, as a private citizen decided to complete the “fairly lengthy” application.  He did seek and received letters of support from the Wythougan Preservation Society and several American Indiana across the United States that have ties to the Pottawatomie Indians. 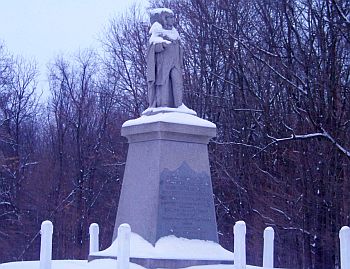 The Chief Menominee Memorial Site qualified for status under the separate criteria; one is that the site is associated with events that have made a significant contribution to the broad patterns of our history.  Also mentioned in the applications is that the site is associated with the lives of persons significant in our past, notably Daniel McDonald, one of if not the best know historical figure of Marshall County history.  He was a historian and published author and was a statesman who had a specific goal in mind to acknowledge our role in the mistreatment of Chief Menominee and his tribe.  The finally the site possesses high artistic value in representing the work of an accomplished sculptor.

In 2009 Marshall County held a ceremony celebrating the 100th year of the granite monument to Chief Menominee.  The monument was created to acknowledge a tragic event in our national, state and local history.  The statue is the only memorial to a Native American on the National Register.

A signed certificate regarding the Indiana Register of Historic Sites and Structures, the state register and National Register status of this property will be sent in the next few weeks. 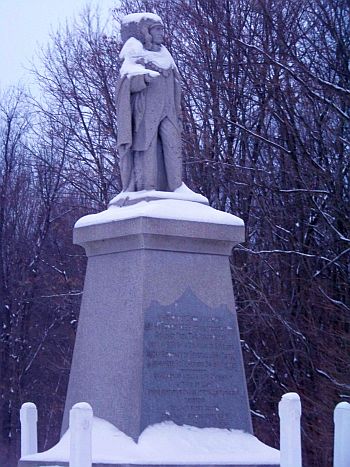 A total of 50 sites across the country were approved.  The states of Colorado, Iowa, Maryland, Massachusetts, Minnesota, New Hampshire, North Carolina, Pennsylvania, Tennessee, Virginia, Washington, and Wisconsin along with Puerto Rico had sites approved.  Indiana had a total of 14 sites approved including the Mock School in Kosciusko County, the Walter Allman House in Lake County, the Valparaiso downtown commercial historic district boundary was increased, and the Angola commercial historic district.