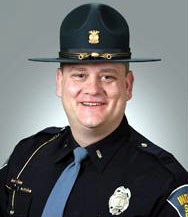 Strong is a Knox High School graduate that continued his education at Ball State University.  Strong graduated from Ball State in 1993 with a bachelor’s degree, majoring in criminal justice.  After graduation from Ball State, he worked for the Starke County Sheriff’s Department before joining the state police.  Strong is a 16-year veteran of the department and has worked at the Bremen Post since graduating from the Indiana State Police Academy in 1994.

During his tenure with the department, Strong worked as a trooper in Marshall and Kosciusko Counties before being promoted to the rank of corporal in 1999.  In 2004, Strong was promoted to the rank of sergeant and became the squad leader for troopers working in St. Joseph County.  Most recently Strong was promoted to Assistant District Commander of the Bremen Post and the rank of first sergeant in February 2009.  Strong has also served as a Tactical Intervention Platoon Squad Leader, worked as a Field Training Officer, and is an accident reconstruction officer for the department.

Strong lives in Plymouth with his wife Jessie and their three children Kiara Patrick, Kalem and Kollin.