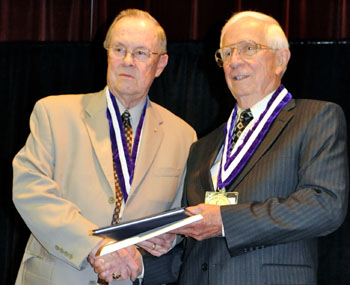 12/22/10 Dr. John Bottorff, Sr. received the honor of being named a Fellow to the Palmer Academy of Chiropractic this year. Those receiving the honor are proven leaders in their profession and communities.

In accepting the honor, the 87-year-old practicing chiropractor expressed his regrets that his late wife Carol could not be with him to share the moment. Carol (Emenaker) Bottorff passed away in 1994.

Bottorff remarked, “Nothing was going to stop us from getting a sheepskin (doctor of chiropractic degree),” said Bottorff.  “My wife wanted to attend Palmer Chiropractic College too, but we only had enough money for one of us. It was decided that I would go, and she would help work to get us through school.” Bottorff said it was a collaborative effort with is wife to receive his training.

The couple moved to Iowa in 1950 with very little money. Bottorff’s GI Bill had lapsed and the entire country was struggling to recover from WWII. But they didn’t let the lack of funds stand in their way. It took the next four years of both of them working to obtain his degree. Dr. Bottorff worked nights at a foundry and other seasonal jobs. His wife worked in a factory until she was furloughed due to pregnancy. Family members say Carol concealed her pregnancy as long as possible by wearing baggy jeans that were pinned and oversized shirts.

It then took another year of working to pay back the tuition and finally receive his diploma.

According to family members, Bottoroff credits his life successes to “the guiding hand of God.” During WW II, while serving with the Fifth Army Air Corps in the South Pacific; he was part of a group that overtook islands after bombing or capture.

Bottorff says two spiritual moments remain vivid. The first, asking Carol to become his wife, and the second, deciding to become a chiropractor and dedicate his life to the profession.

He is active in his community as well. He attends St. Michaels Catholic Church and has served as a trustee, Eucharistic minister, honorary chair of the Mission 2000 Building Fund, and a member of the finance committee. He is a strong advocate of Ancilla Domini.

Two of his children followed in his footsteps and received their degrees from Palmer.

Bottorff tells his patients that the three most important things a person can do for good health are diet, rest, and good posture. He believes there is a strong connection between the mind and good health since good health takes work and is never a given.

Bottorff often instills his life’s wisdom in his children, grandchildren, patients and friends saying, “Do it in the eyes of God to the best of your ability.”