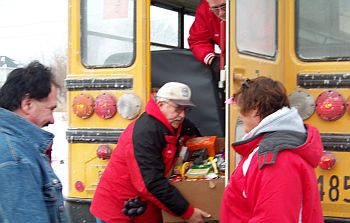 12/17/10 It took volunteers at the Marshall County Neighborhood Center over two hours to put away food donated by the Plymouth Schools bus drivers on Thursday morning, but they all agreed it was worth every minute.

Bus driver Judy Weston was one of four drivers who delivered 811 food items that students had contributed over the last several days.

Weston said, “This is the first time we have ever collected food.” She said, “It started after a couple of kids on my bus asked if we could start a food drive and I thought it sounded like a good idea.” During a staff meeting, they discussed the idea and received the overwhelming approval from Assistant Superintendent Rodger Smith to implement the drive. Several of the drivers who were able to work the project into their schedules then began making it happen.

Weston said, “We are so pleased with the way the kids brought in food.” 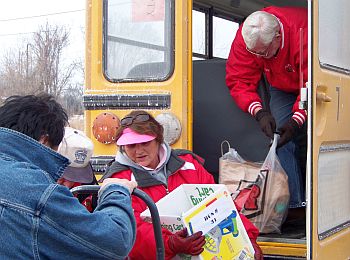 Neighborhood Center Board member and Menominee Elementary Principal Michael Dunn said, “It’s just wonderful to see our bus drivers as shining examples of our corporation’s core values of caring and commitment to students,” Dunn added, “This is not their only act of kindness. We see it throughout the year.”

In addition to Weston, drivers delivering the food to the Neighborhood Center included Sherrie Martin, Dave Lattimer, and Mike Chaney.

Sarah Hendrix, Neighborhood Center director, was floored when she heard that such a large donation had come into the pantry. She said, “We are seeing so many more people now who need food. This is really a great help.”

Hendrix said they also still need people or organizations that are willing to adopt a family for Christmas. She said they had well over 400 applications for assistance from families with children and there are still 111 families that need help.

For more information on the Christmas Adoption program or to learn of other needs for the Center, please call 936-3388