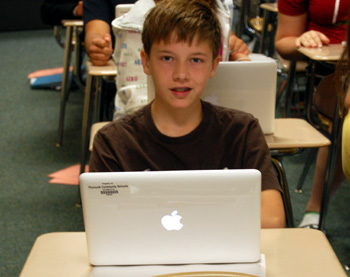 12/16/10 The one-to-one computer program at Lincoln Junior High, where every student and each certified teachers has a laptop computer, has now gained some recognition at the state level.

LJH Principal Dan Funston, along with Superintendent Daniel Tyree, teacher Bob Garrity and student Garrick Nate presented an overview of the program to the Indiana State Board of Education last week. Funston said Nate did a great job in showing how he uses the laptop for various projects

The presentation can be viewed on the Indiana State Board of Education’s website.

Funston said, “Teachers Bob Garrity, Paula Neidlinger, and Kate Kappler had made a presentation to superintendents and technology directors at a meeting in October. Two members of the Department of Education were at that meeting and invited us to speak to the state board.”

Funston said he receives a phone call or email almost daily from schools around the state asking questions about how the program works and how the Plymouth Corporation was able to fund the project.”

But for now, Funston is concentrating on the next phase of the program. Following the winter break, Funston said students will be allowed to take the laptops home with them. Although students have had full access during the school day, the computers have been left at the school at the end of classes each day. Funston said, “We have had very few problems and only one or two computers have needed repairs.” He said, “I believe the real learning extends beyond the school walls.”

Funston said LJH has five new teachers, a new guidance counselor. and a new dean of students this year. He said, “And then with 600 computers and no additional technology staff, I have been pretty busy.” However, it appears that his diligence is having a big payoff. He said, “We can have instant assessments and instant feedback. It’s given us a lot of impact.”

Funston said, “The community can be proud that we didn’t drag our feet on this.”

He said one of the best things to come out of the presentation to the State Board was a chance for them to talk to decision makers about how they can help move forward. Funston said, “I negotiated with Apple, but it could be more cost effective if many schools were negotiating at the same time.” He said he hopes the state will view digital resources as they have textbooks in the past with state approvals.

During the December 9 Plymouth School Board meeting, Plymouth High School Principal Jim Condon unveiled the corporation’s plan to have a one-to-one program at the high school level beginning with the 2011-2012 school year.