Shop With A Cop Takes 342 this Year 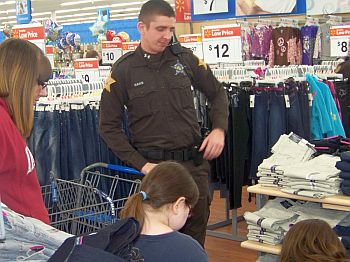 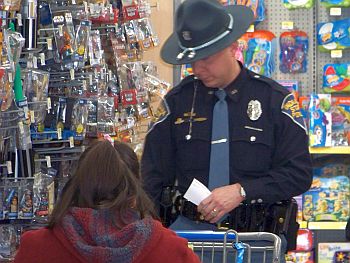 Last Saturday 332 children from around the county had to opportunity to go shopping a Wal-Mart.  Prior to the shop the children, their parents and or guardians, other family members and a drove of emergency workers from around the county were treated to a breakfast at Plymouth Highs School courtesy of the Masons.

Hurshel Hunter, President of the FOP Lodge spoke to the crowd and talked about the Lodge’s concerns for kids in the community.  He also explained that the day could not have been so successful without the generosity of so many. 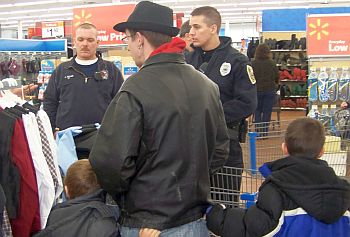 After breakfast the children and their families were let-out in shifts every 10 to 15 minutes to avoid a stampede at the store.   Dozens and dozens of police officers from the Plymouth Police Department, Marshall County Sheriff’s Department, Indiana State Police, Argos, Bremen Department, State Excise Officers, DNR Officers and even the Starke County Sheriff’s Department went to Walk Mart.  They were joined by firefighters and EMS personal from around the county and even some private individuals.

The top priority of the emergency workers was to steer families to the clothing areas first.  Kids were picking everything from socks and underwear to jeans and sweatshirts and winter coats and snow-pants. They were looking for boots and shoes, hats and gloves and pajamas. 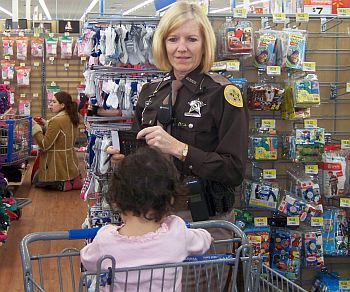 After shopping for the important items then the children were given the opportunity to go to the toy section and pick out a toy or two.  Surprisingly, as you looked into the shopping carts many were filed with major loads of clothing and no substantial toy or toys.

Hunter said the whole thing took less than four hours to complete.  He commented on the “great community we live in” and said, “We could never accomplish the project without their generosity.”  He also wanted to thank everyone who assisted the Shop With A Cop project by participating in the car show, motorcycle run, radio auction or those who dropped their change in one of the jugs or purchase window ornaments and to those who wrote checks or donated money for the project. 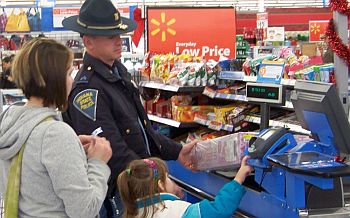 The goal this year was to take one more than last year and the Shop With A Cop program did more than that, they actually took 10 more kids that last year.

Not only does the program take needy children, they also take 10 clients from Marshall Starke Development Center who would not have received anything for Christmas.  These special adults purchase needed clothing.

Plymouth FOP wants to thank everyone for making this year’s Shop so successful.