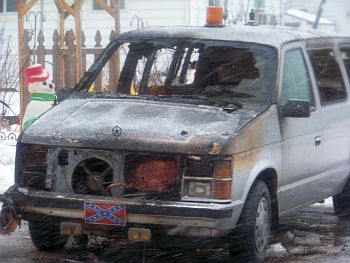 12/13/10 Sunday afternoon a 9-1-1 call of a vehicle fire in the 400 block of Alexander Street sent emergency workers out into the cold and snow.

A mini-van owned by Bill and Margo Wallace was fully engulfed when firefighters arrived on the scene.

Bill Wallace said he and his family had been visiting family.  They had been home about 45 minutes when their son looked out the window and noticed that the van’s engine compartment was on fire.  Mr. Wallace went out and opened the hood but the flames were too high.

As he attempted to retrieve his CB radio the dash burst into flames.  The family was able to take the baby’s car-seat out but was not able to get the base before the fire got too big. 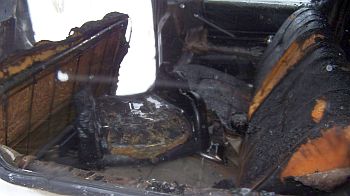 No injuries were reported and firefighters were on the scene for only a short period of time.