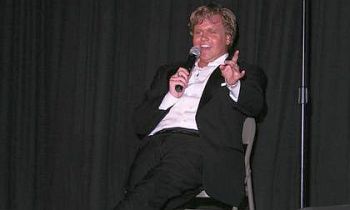 12/09/10 Local performer Quentin Flagg is gearing up for his annual Christmas performance. This year he will be entertaining at the LaPaz Community Building on December 12 from 2:00 p.m. until 4:00 p.m.

Flagg said, “I just enjoy making people happy.” It’s obvious that putting on shows makes him happy as well since he has been on stage at Christmas for the last 13 years.

Flagg said his December 12 show will feature a number of Christmas selections along with his signature 50’s and 60’s rock-n-roll favorites. He also promises some surprises and a visit from Santa himself.

Although Flagg spent many years doing his unique impersonations, he now concentrates his efforts to just being himself.

“I’m encouraging everyone who joins us for the night to bring a non-perishable food donation for the Marshall County Neighborhood Center.” Flagg said.

Flagg has been extremely busy this year with performances at Pigeon Forge, Tennessee and places throughout the mid-west. In January, Flagg will be taking his talents on his 10th cruise ship booking.

He is planning his April birthday tour that will begin in Cincinnati, Ohio and end up in his hometown of Argos. The 2002 Argos graduate said he never wants to forget his roots.

Tickets for the Christmas program can be purchased for $8 in advance and $10 at the door. For advanced tickets, contact Flagg’s manager and biggest supporter, his mother Maggie at 952-2805. Information on his upcoming tours can be found his website at www.questinflagg.com.